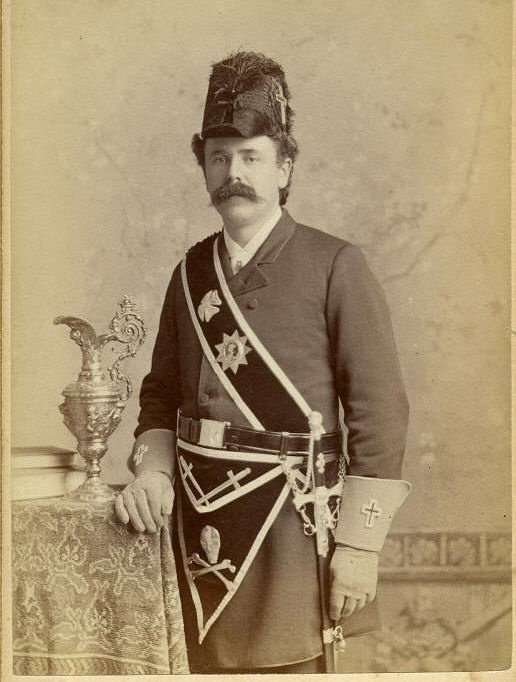 The uniform of today is not our forefather’s uniform that was worn prior to the 1950’s. The early uniforms were copied after the dress naval uniforms of that earlier time period. Why our Grand Commanderies and Grand Encampments chose such dress is unknown.

The Knight Templar uniform herein described was popular from about the 1880’s to the 1940’s. Long sleeve white shirt, with black pants made of wool, dark socks, and black shoes. Now keep in mind that this uniform would cost the individual Sir Knight, for some Commanderies in their early by-laws required that the candidates would have to procure a uniform before he could be made a Knight Templar.

The next item is the coat or frock with full dress standing collar. Full dress is from the neck to just above the knees. The standing collar was a high collar that wraps around the neck and would button or clasp at just below the Adams’ apple. Lined usually with cloth and satin, the coat was made of 100% wool, single or double breasted, a hot and heavy item.

Next is the hat, a Knight Templar wore two, the first was used during the Order of the Red Cross and Malta called the fatigue cap. Made of cloth or wool similar to a military dress cap, it may differ depending on the Commandery or Grand Commandery rulings. A cover made of leather or a material called duck cloth was also generally used. A passion cross would be sewn on the front of the cap and if the Order of the Red Cross was being conferred, then the cover is placed over the top of the cap covering the cross. When the Order of Malta is being conferred, the cover is removed.

The second hat is called a Chapeau (French) similar in style to early military hats. These also differed in style, in Massachusetts most wear the Chapeau with Ostrich feathers, but in St. Bernard Commandery No. 12 their Chapeaus were featherless. The reason, they were a mounted Commandery. These chapeaus were molded by using a material like cardboard, and then beaver skin was applied; the inner lining was usually satin with a leather sweatband sewn on. The plume or feathers would have been made out of selected imported genuine ostrich feathers, in different widths and thickness. Plus add the rosette with Templar Cross, rayon gimp, silver or gold gilt, gilt tassels, black or white plums and don’t forget the brass name plate for the Sir Knight sewn on the inner lining. One popular theory of the distinct between black and white plums was that when the uniform changes took place in the 1950’s the desire was to show a distinction between a “Mounted” Commandery and a regular unit. Since the chapeau of the mounted Commanderies was “featherless” a black plum would denote that better. However, no regulation or edict has been found to confirm that concept, and it seems more likely that the choice was more of a personal preference as the present day styles tend to be mixed.

Next was the sash, also known as the baldric worn from the right shoulder to the left hip, some where longer, and made of black velvet, those too would also differ in style. In some jurisdictions leather was used, lined with either green satin or cloth, which could be reversed to be used during the Order of the Red Cross. Then add the nine pointed Commandery insignia, Malta Cross, square and compasses, gold or silver bullion and extras, such as Boston Commandery No. 2 at the point of the baldric on the hip suspended by a ribbon was a gold (brass and wood) dagger.

Then there was the belt made of leather in colors of brown, black, red, white, and gold, with slings of two or three chains to hold the sword. Then add purple or red or gold lacing and don’t forget the buckle of which many styles were made. Then the apron, most Commanderies did wear them, lined with green or black cloth or satin, they too could be reversed for the Order of the Red Cross. The apron made of black velvet, maybe trimmed with gold or silver bullion, and would have a number of different symbols on the front, a skull and/or crossbones, a triangle or triangle with a Salem Cross.

Then came the sword, the length was made to the height of the Sir Knight, made of wood, metal and brass with different styles, some gold washed or silver overlay. Grips could be made of ebony, celluloid, ivory, leather or wood. The scabbard could be made of steel, brass, or leather, gold wash, brass or silver overlay with ornate brass fittings, plain or beautifully etched with Commandery, Masonic and/or floral motifs. Last the gloves, white to be used in the asylum, gauntlets made of tan leather with cuffs over the wrists for use while in public. Then there are the extra, officer shoulder straps, medals such as the Red Cross, Malta, membership jewel, past commander jewel, triennial ribbons or medals, veteran pins, special night, anniversary or pilgrimage medals. A cape, or mantle, extending from the shoulders to the hip was also worn on certain occasions.

The heavy and pricey uniform of our Sir Knights forefathers has passed into history. With the advance of time and technology the Knight Templar uniform has changed. The material is lighter and more comfortable, and the jacket is shorter. The double breast jacket has replaced the long wool frock. In a more modern sense the Sir Knight still bears the military appearance to preform his deeds of exalted usefulness.