Ezra Butler Eddy who was one of Canada’s most progressive manufacturers, became one of its most loyal citizens and few men of his time were more devoted to his Sovereigns institutions and more imbued with the National traditions and aspirations than was he. Descended from the oldest Puritan stock, the blood of Miles Standish flowed in his veins. Lois Eastman, his grandmother, being a Standish and direct descendant of that New England hero. He was born near Bristol, Vermont on August 22, 1827, the son of Samuel Eddy and Clarissa Eastman. His father was of Scottish ancestry.

He began manufacturing wooden matches by hand in Burlington, Vermont in 1851. In 1854, he brought his business to Hull, Quebec when he was only twenty-four, where he began producing matches using discarded wood from the nearby sawmills. With the help of his first wife, E. B. Eddy produced his matches by hand at his home in Hull. His business grew rapidly, becoming one of the largest match factories in the world. In 1856 he added the manufacture of wooden ware, such as pails, tubs, washboards, clothes-pins, etc., to his business. In 1858 he commenced lumbering in a small way; but all these branches increased in volume from year to year, up to 1868, when the business had reached a magnitude of one million dollars per annum; and at the present time the yearly out-put is upwards of $1,500,000. In 1882 his entire premises were consumed by fire, and this entailed upon him a loss of $250,000, over and above insurance. With characteristic enterprise and courage, in the space of twelve months new premises were erected, and he was able to turn out nearly the same quantity of goods, as during former years. By 1886, he had reorganized and established the E.B. Eddy Company. He set up a factory, acquired timber rights and built his sawmill. At the same time, he expanded into the pulp and paper business. 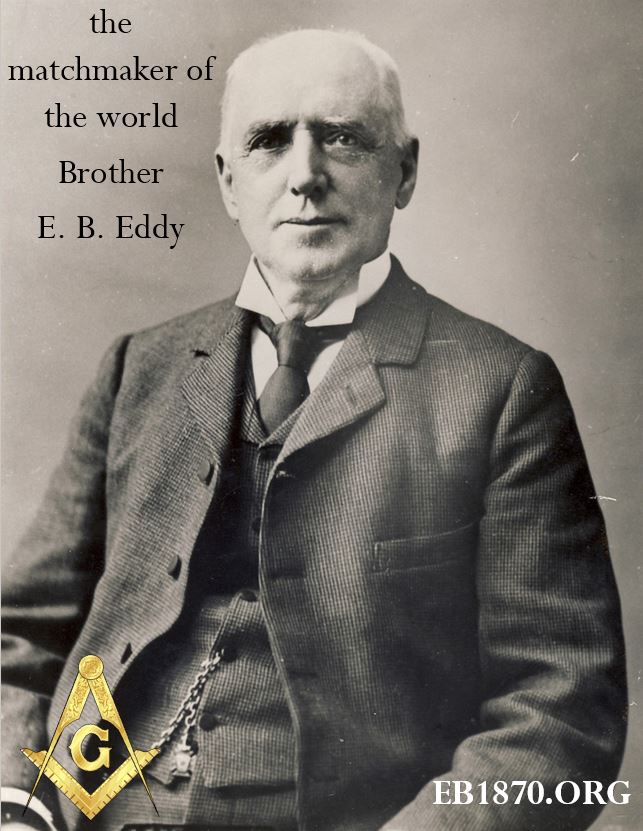