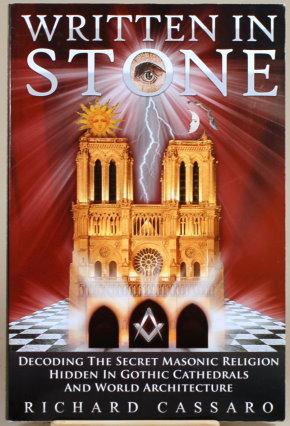 A lost Universal Religion was practiced globally in antiquity. Its remains are memorialized in pyramids and temple architecture worldwide. Its wisdom is still visible in ancient ruins, and has been perpetuated in Western Secret Societies.

The most visible of these is the Masonic Fraternity, an age-old chivalric Order whose members have included the American President George Washington, French Philosopher Voltaire, and the German Composer Mozart. Fearing their secret might one future day be forgotten, the Freemasons of ages past—who were the builders of Europe’s and America’s churches, castles and cathedrals—wisely encoded its wisdom into the architecture of their constructions, where it remains concealed today.

By matching cathedral architecture with ancient temple design, Richard Cassaro shows the universality of the Universal Religion, which is the root wisdom of the Masonic Fraternity and the perpetuation of a life-changing ancient science.

Written in Stone is a well-researched, alternative history narrative that argues that certain trends in ancient architecture, namely the “triptych,” is evidence of an ancient “universal religion,” that was practiced around the world.  Cassaro contends that this ancient universal religion was “banned,” in the West some 2000 years ago by the Catholic Church but it lives on in medieval architecture as well as in the various mythos and symbolism of many current day secret societies.

While I can’t say I am one hundred percent sold on the author’s thesis it was a rather fascinating read and I think many of the authors points are quite revealing.  Readers that were intrigued by the architectural references of Dan Brown’s Angels and Demons or Alan Butler’s Rosslyn Chapel Decoded with enjoy this book.

It is often found amongst masons that concern themselves with that esoterica of the masonic variety, that they should be able to recall a book, article or perhaps documentary film that began their search for more light and ultimately follow the path of Freemasonry. In my particular case, I can clearly state my masonic catalyst would be the book “Written in Stone” by Bro. Richard Cassaro.

The purpose of the book is to reveal the “Hidden Secret” that lies within the architecture of cathedrals built by freemasonry’s predecessors during the gothic period, explain how that secret is incorporated into masonic ritual and symbolism and how the very same secret is derived not only from the ancient mystery schools of antiquity, but possibly from a much older universal religion from which all others eventually arose.

I won’t spoil the mystery of what this secret actually is, but I will tell you that Cassaro’s hypothesis is clearly detailed, written both succinctly and plainly in such a way that even a layman to this sort of material can clearly grasp it and supported by an almost never ending torrent of supporting evidence. That isn’t to say that some of the conclusions contained within aren’t a bit controversial or even that they’re to be considered proven beyond a shadow of a doubt. The evidence is there, the hypothesis is drawn from it, what you choose to take away from that is up to you.

In the process of making his argument, Cassaro draws upon the works and wisdom of various scholars of varying disciplines to help make his case. Most notably of these would be Joseph Campbell from whom the author draws much supporting evidence for his theory. Each chapter is replete with footnotes that provide the curious reader with vast amounts of reference material to investigate.

Of all the sources of reference material provided, none is more compelling than that of Cassaro himself. Richard Cassaro has been a field explorer for over thirty years and has personally visited all of the locations discussed. He has written three books on this topic, “Written in Stone” being the second.

Whether you adhere to the arguments put forth or not, this is a compelling read and well worth your time, even if just to satisfy your curiosity for a fun quirky point of view. For my money, I find this to be a smart and entertaining look at a highly plausible theory of not only how our order’s symbolism was intended to signify, but where these ancient symbols may have ultimately derived from. I give this book a very high recommendation, most especially to the more open minded amongst us.

The book can be purchased HERE on Richards Website